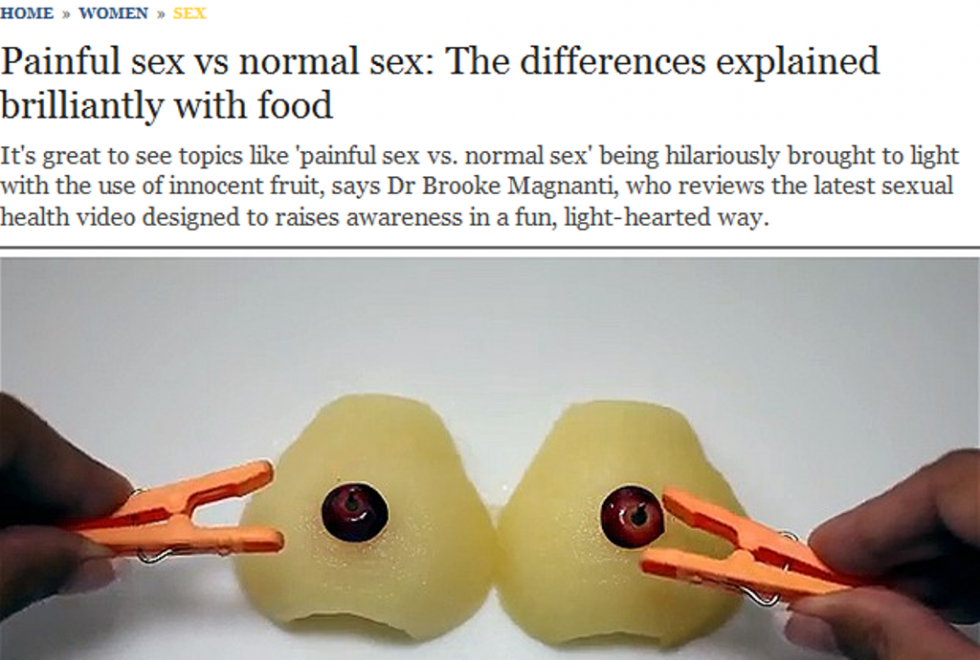 We received international media coverage in newspapers including the Telegraf in Serbia and on blogs and news sites in the UK, the US and numerous other countries, including Nigeria. We were particularly pleased to achieve coverage on Nigerian blogs as awareness and correct information about vulvodynia had previously been virtually non-existent in that region.

You Tube statistics show that the video has had thousands of views in countries worldwide including the UK, New Zealand, Canada, the U.S, Israel, Nigeria, India, Russia, India, China and more. The video has now been viewed almost 100,000 times.

Support from the medical community

Invitations and interest re collaborative projects from leading individuals and organisations in the international sphere of sexual health and pain management, including Coady and Fish (U.S authors of ‘Healing Painful Sex’) and Museum of Sex  in New York:

“We love the work you’ve done with your video and would love to help out Women4Real. We are passionate about your mission and would be glad to spread the word however we can. Pelvic pain and painful sex are not discussed often enough and we love that you’re working to change this.”  – Deborah Coady and Nancy Fish

“I think it is an excellent educational piece and won’t cause offence. Women4Real is now the primary website I refer my clients to.”  –  Clinical Psychologist specialising in gynaecological and sexual difficulties, Vulval Clinic, Auckland City Hospital, New Zealand

“I really enjoyed your video and tweeted about it and have included it on our program’s facebook page. I think that social media is the way to get your message out to the masses.”  –  Dr Lori Brotto, Director, UBC Sexual Health Laboratory, Associate Professor, Department of Obstetrics & Gynaecology, UBC  University of British Columbia

Positive feedback from women with sexual pain issues and their partners

We have received positive feedback from women with vulvodynia and sexual pain (and a few male partners too!) who loved our approach to the issue and have used the film to explain their sexual pain issues to others. Many signed up to the Vulval Pain Society webinars we offered about the issues:

“I just wanted to say thank you for making your film, it’s made me feel less alone and helped me explain about my vulvodynia to my friends – they totally got how it feels from seeing the chilli on the BBQ!”

We approached key sponsors who share our aims and values and they supported us via their websites and social media:

“As the first feminine hygiene brand to be founded with the aim of improving women’s menstrual health Natracare were keen to support a film that raises important issues such as vulvodynia”   – Susie Hewson, Founder of Natracare

“This area of women’s sexual health is rarely talked about, with thousands of women suffering in silence, but thankfully treatments for vulvodynia are available.  Amielle is proud to be associated with Women4Real’s film, which imaginatively and succinctly conveys the difference between “intentionally” painful playful sex and vulvodynia, an unwanted burning pain making penetration for women unbearable and even impossible. We were able to show your video on our stand at the COSRT conference and the response was great. It was great as a conversation opener, so once again Thank you!”  – Tania Mackenzie, Amielle Marketing Manager